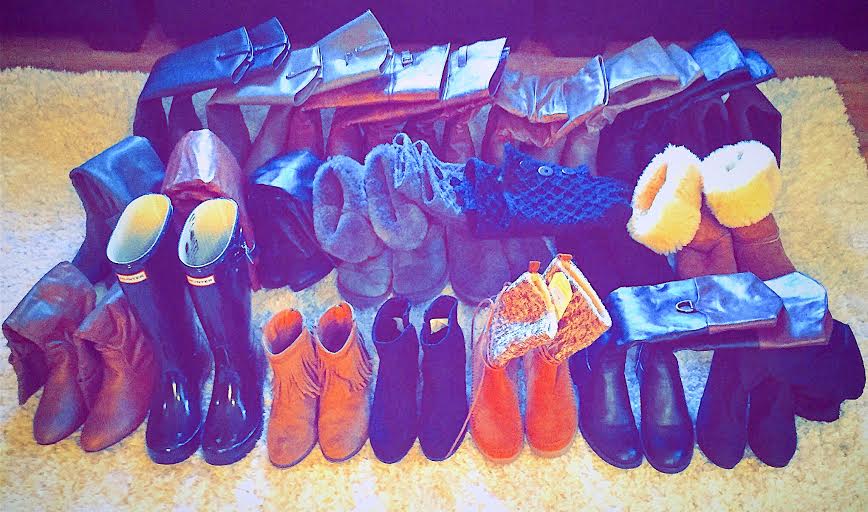 Hi, my name is Jess. I am addicted to buying boots.

Is there anything that you buy a lot of? Is there anything your significant other has banned you from buying more of? I’ve actually been banned from buying more throw pillows. My boyfriend doesn’t understand that 30 throw per room for décor is not only totally normal, it’s necessary. It’s totally possible that after this post I might be banned from boots too. Honestly I didn’t even realize I had this many until I thought about taking a photo for this post. Yikes! I mean, I need them though, ALL of them, and actually I need MORE. I’m that person that even wears boots in the summer, most of the fall, for sure the whole winter, and in South Dakota we don’t really have spring we have MORE winter, so I wear them then too. Starting last year and more so into this year, little booties are a huge trend. As you can see, I only have two pairs of those, so clearly I’ll need some more of those. I’m also currently in the market for great cowboy boots and ones totally filled with fringe!! Ok, all jokes aside, that’s a lot of boots. I put them away in multiple areas of the house so no one can see them all together and really notice the sheer amount I may or may not have. Sometimes, if I really like a pair, I’ll buy three of the same one because I’m really worried about what will happen when they’re all worn through and they don’t make them anymore. I do have one kind that I’m on my fifth pair, and I have two brand new pairs in the closet as back up for broken ones! That’s serious love of boots, that pair specifically.

The big reason for this post is I’d really love my readers and followers to be more involved! Leave me some comments, lets start a conversation! What do you buy too much of? Who needs an intervention? I probably won’t be a very big help since there’s probably a good list of things I need to stop collecting, so let’s just say I won’t be the intervention leader! I’m also not going to link any of the boots in this post because I’d prefer no one seeing any prices, hehe.

PLEASE COMMENT BELOW!! I know I’m not the only one! Who’s going to confess?!